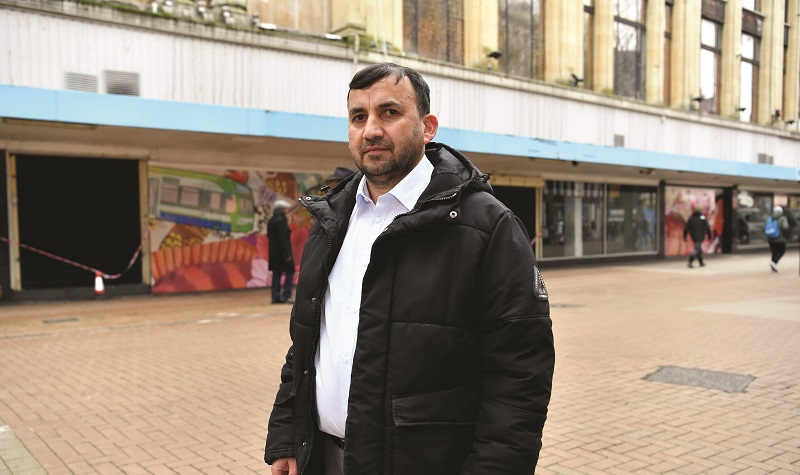 A trader kicked out of the former Croydon Village Outlet said he has been fighting Croydon council for more than two years, and claims to have lost thousands of pounds in stock.

Sardar Agha, 49, was one of dozens of shop staff and owners who turned up to work in July 2019 to find the locks changed.

The former Allders building, where the outlet was based, is owned by the council but managed by the Croydon Partnership, which combines Unibail-Rodamco-Westfield and Hammerson.

The council took control of the building in North End when it bought the site in 2019 in preparation for the long-awaited revamp of the town centre.

It would have made up part of the huge Westfield shopping centre, which has since been ditched in favour of fewer shops, a hotel and offices.

Mr Agha had run Regal Housewares since 2017 across two shop fronts on the ground floor, which cost him around £2,500 a week in rent.

He claimed he had £1million worth of stock stored at the building, some of which has been sold off.

Mr Agha, who has three children under 18, claims he has spent £100,000 on legal fees trying to get to the bottom of what went wrong.

He has also been involved in a back and forth of legal letters, but does not feel he is getting answers.

Mr Agha said: “I tried to get a warehouse but they are asking for £120,000 rent a year with a three-month deposit. Without the shop I don’t have the money to move.

“The council promised me they would help me move my stuff, every month I go and ask.”

He reported the missing stock to the police in February 2021, but the case was closed with no arrests made, according to the Met.

In legal letters a lawyer said Mr Agha was given extensions to remove his goods and disputes how much the stock was worth.

But the trader maintains he was promised he could store his goods in the building, and said he has struggled to find a space big enough and cheap enough to store it all.

The Croydon Partnership said it told Mr Agha it would sell his stock to cover the cost of storing the items.

Since the shop was closed down, the 49-year-old from Harrow has worked as a van driver delivering furniture.

In his two-year fight, he claims he has re-mortgaged his house to pay for lawyers, who have sent a number of letters to Croydon council on his behalf.

Croydon Village Outlet was closed when the council could not reach an agreement with the previous owners.

The Allders building has been empty since then as the future of the town centre remains uncertain.

In 2019, the Croydon Partnership announced it would review the scheme to include fewer shops, a hotel and offices.

But in August 2021 it was revealed it could repurpose part of the former Allders building, possibly for an educational organisation.

In a statement, the Croydon Partnership said: “Regal Kitchenwares was relocated to the Whitgift Centre in 2019 with six months’ rent free in addition to complimentary temporary storage space which allowed access to stock when required.

“Formal notice was given to remove stock from the temporary storage space, which was extended by approximately one year to further support Mr Agha.

“Despite Mr Agha attending the property during this time he did not remove his stock and was subsequently notified that the stock would be sold with ongoing costs deducted from the proceeds.

“The council and the Croydon Partnership have tried over a long period of time to support Mr Agha.

However it is not possible to provide ongoing free storage premises as requested by him.”

Plan for homes on side of historic pub forced through