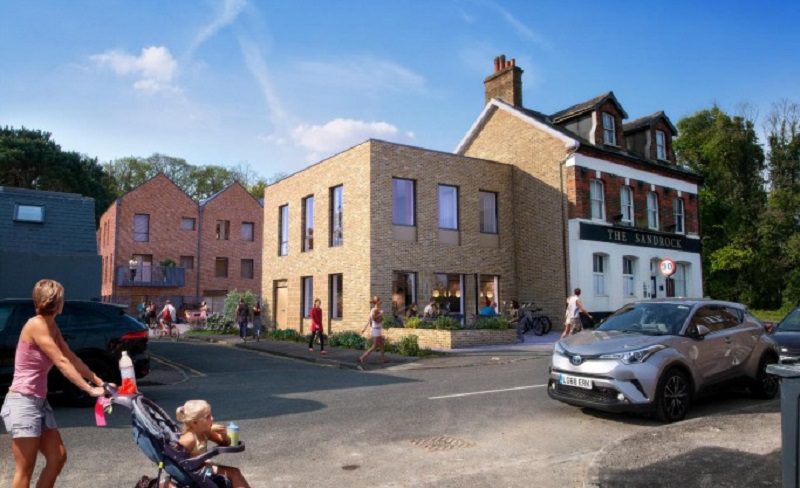 A move to add flats on the back of an historic pub has been pushed through after the planning inspectorate overturned a council decision.

The 150-year-old Sandrock pub, in Upper Shirley Road, Croydon, will see a two-storey extension built at the side and back for “an enlarged service area” and four flats on the upper floors.

It will have a further 11 flats and four houses in a three-storey building at the back of the site, along with a play space and car parking.

Many people have been fighting the plans since they first emerged in 2018 when the pub closed.

Back then, neighbour David Percival said: “This will see a really pretty building have a bunch of tacky 1960s-like flats attached to the side of it. Any new building should resemble what’s there.”

The council’s planning committee went against a recommendation to approve the application in March 2021 and refused it on the grounds of over-development.

Applicant Marshall Hurley Bratt Sandrock appealed the council’s decision. The appeal said: “The proposal is for the refurbishment and extension of a long vacant pub to ensure its long-term future success. It also provides 19 good quality homes of which 30 per cent are affordable.”

Last week, the decision to refuse the plans was overturned by Guy Davies, an inspector appointed by the government’s planning inspectorate.

The decision read: “I conclude the development would not harm the character or appearance of the area, including the non-designated heritage asset of the Sandrock public house, which would be retained on its prominent corner site.”

According to the Layers of London website, the pub has a ghost of a preacher who stalks the bar areas.

Pictured top: An artist’s impression of what the homes could look like