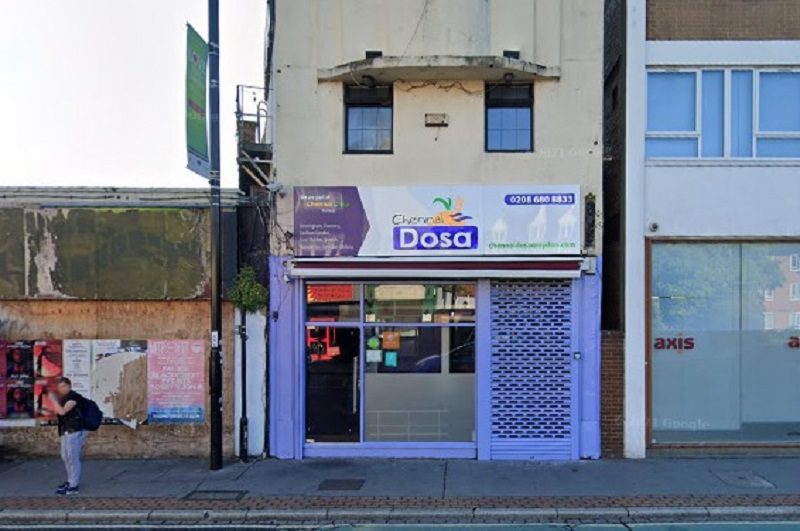 Three men were stabbed “multiple times” at an unlicensed party held above an Indian restaurant in Croydon.

One man was stabbed seven times at Chennai Dosa in Croydon, which was renting out an upstairs room of the restaurant for a weekly event.

Croydon council’s licensing committee heard details of a brawl where three people were allegedly stabbed at the restaurant in the early hours of July 4.

The committee watched CCTV footage of the incident, which was described by Olivia Davies, a barrister representing the police.

Ms Davies said the upstairs room of the Brighton Road restaurant was rented out for a weekly “promoted event” called Feel a Vibes Sunday.

She said organisers paid the owner, Ravichandran Nattuselvam, £1,000 for this and brought and sold their own alcohol.

She told the meeting on Wednesday morning: “At 2.45am on July 4 a man stumbled into a group and an altercation breaks out with someone throwing a glass bottle. A few moments later a much larger fight breaks out.”

The doorman became overwhelmed as people began to arm themselves, with one man allegedly wielding “what looks like a machete”.

The fight resulted in three men being stabbed, with one victim receiving seven stab wounds to several parts of his body. The incident is now being investigated by police.

The restaurant’s licence was suspended until a review could be carried out.

Police suggested its hours be changed to 10am-11pm and until midnight on Fridays and Saturdays. It was previously allowed to open until 2.30am.

David Phillips, representing the applicant, apologised for the behaviour of partygoers before the licence was suspended.

He said the restaurant started renting out the room after losing money in the Covid pandemic.

The committee agreed with police that the restaurant should no longer be able to open until 2.30am. Conditions also includes that staff must receive training in the Licensing Act and conflict management.

Police said no arrests have been made and enquiries are ongoing.

The holdall was sniffed out by Police Dog Chase and was found to contain an assault rifle, magazine and ammunition. Croydon – South London News …

One man was stabbed seven times at Chennai Dosa in Croydon, which was renting out an upstairs room of the restaurant for a weekly event. Croydon – South London News …

On Friday, MPs debated the private members’ bill proposed by MP Stuart McDonald for Neonatal Leave & Pay in Parliament and gave it the thumbs up on its second reading in the house.  Croydon – South London News …

The woman claims she spent only a week with her intended sponsor before they went on holiday for three weeks, and was given unusable food vouchers by Croydon Council. Croydon – South London News …