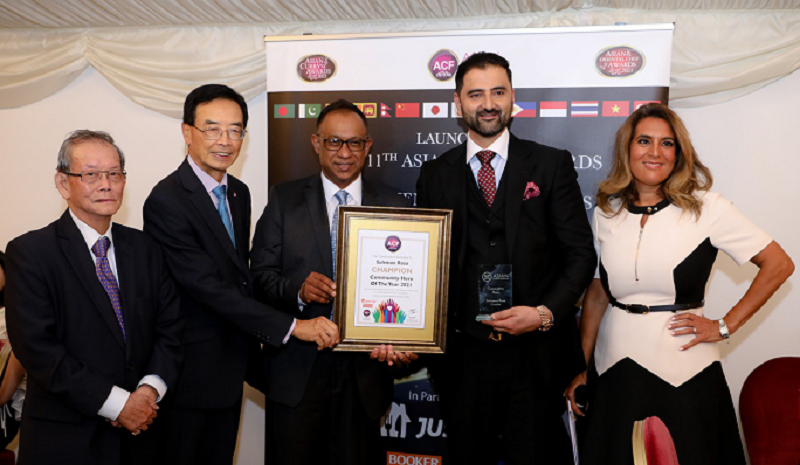 Suleman Raza, who owns the Spice Village chain of Spice Village in south and west London and the Grand Sapphire Hotel and Events venue in Croydon, has received a special Local Community Hero award, at a ceremony at the House of Lords, on 7th September.

Early in the pandemic, in March 2020, Raza launched the ‘One Million Meals’ campaign to provide hot meals to hospitals, the vulnerable and the homeless.  One Million Meals – Feed the Frontline Keyworkers

The nationwide scheme, raised nearly £50,000 and involved 110 restaurants throughout the country to support the vulnerable and frontline workers at 47 hospitals and over 200 other locations.

During the school holidays, the scheme provided 2,500 meals to under-privileged children, highlighted by footballer Marcus Rashford.

Suleman said; “I am glad that we managed to serve ten of thousands of meals through local restaurants that geared up their businesses and got their operations going in those turbulent times,

“So, I would like to dedicate this award to all those restaurants and volunteers who participated and supported my campaign.

“Every one of you can be a community hero by helping those around you who need your help.”

Still supporting those in need, attention will be turned in Afghan refugees, food banks and the homeless and those living alone. Raza plans to restart his ‘No One Eats Alone’ initiative this Christmas, with restaurants opening to provide group meals for individuals who would otherwise spend Christmas Day on their own.

Presenting the Community Hero Award, ACF Chairman Yawar Khan said: “Many of our country’s restaurants still managed to do great works of charity, despite their businesses being devastated by the lockdown – and Suleman Raza is a worthy recipient.”

There were also special awards for other individuals for their outstanding contributions to their local communities.

Sharif Uddin, owner of DUSK and Kushi restaurants in Essex, was named a Local Community Hero for donating over 15,000 meals to frontline NHS staff, key workers, the elderly and vulnerable.

Mahboob Hussain owner of Royal Nawaab in London and Manchester was commended for services to charity.

Sheikh Mamun, owner of Panache in Elgin in Scotland, provided over 500 free meals to NHS staff during lockdown, was similarly acknowledged.

Determined to make a difference: ‘I’m black, curvy and in my 40s, why shouldn’t I model?’